This celebratory week is brought to you by: 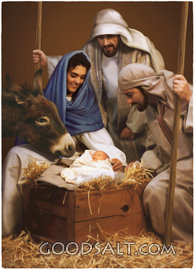 
Originally advertised (including an unforgettable musical number) by:

I also want to share this song by Francesca Battistelli (only 2 1/2 minutes long).  Just a fun little ditty -- enjoy!

Have a safe and happy Christmas and New Year!

Christmas Trivia:
How many wise men travelled to see Jesus?  Leave your answer in a comment....
Posted by LJ at 2:00 AM No comments:

Time to Take a Breather

Today I read a list of names of (mostly) children who were massacred in Connecticut.

It reminded me of my kids' class lists they bring home at the beginning of each school year.  We end up marking it up during the year, especially in preparation for the Valentines to be made and handed out in February.

It reminded me of the lists I typed up for parents in my own classroom, for which I was an aide.

But these kids won't be getting Valentines, nor will they be able to unwrap the gifts that were already under their Christmas trees, or hidden in closets.

This list of names has so much gut-wrenching meaning.  And I could tack on the names of the victims of the Portland Mall shooting, the Colorado movie theater massacre this summer, and the weekly drive-by shootings of kids in Chicago, to name a few other events of recent memory.

Each person, precious.  Each shooting, senseless.

I just needed to write this out tonight, in the hopes that it would help resuscitate my breathing.  Who couldn't use a little resuscitation after a day like Friday?

I have been shaken out of my stupor of mundane life.  I am newly revived to make the most of each day as I look forward to the celebration of Christ's birth, and the coming of Jesus again.  And the kids are getting more hugs than usual these days too.

If You are a Worrier, Don't Read This Entry

These are certainly worthwhile messages, which are usually either preceded or followed by several chapters of reasoning, rationalizing, or how-to-ing.  Doctors, psycho-analysts, and the spiritually gifted are available to offer life-changing solutions for our life-changing fears.

Except the message I need to hear is "Don't be afraid of the little things."  The little worries that keep me up at night, or steal away productive time during the day.  Petty, sometimes irrational things that are not in my control -- which is obviously the reason I worry about them.

Here are some useless worries I have:
Did the dog take full advantage of his "outside time" before bedtime?  What if he needs to pee in the night?  How will he sleep if he's uncomfortable?  He may suffer in silence and not get any sleep at all.  Or he will whine and then I'll have to get up and take him outside.  Ugh, I'd hate that.

One may insert a child's name in place of the dog.  jk!
Or this one:

What time is it?  10:06?  Isn't the host of WXYZ radio station supposed to stop for traffic and weather on the fives?  But it's 06....nope, now its 07.  They are really running behind this time.  They need to get that caller to stop yapping and cut to the traffic girl.  Why don't they interrupt?  Can't they see the time?  I don't even need to know the traffic and weather since I heard it 10 minutes ago, but their programming will be all messed up if they don't wrap this up.  What will their boss think? Oh, finally.  Two minutes late by my clock.

Yeah.  I get bothered if the schedule is not followed.  I blame this on my paternal genes and not on any character trait unique to me.

Oh, great, here I am revealing to all who read this diary what my petty little worries are.  I am really setting myself up for some ridicule now.  They are going to think I'm an idiot.  Or a control freak.  I don't want them to think that.  I want my vulnerability to be unifying, or at least somewhat entertaining. Or worse, what if my worries make someone else start to worry about my worries.  First they'll think I'm an idiot control freak, and then they'll worry that I worry too much. Or maybe naming my worries will just be a trigger for their own worries to surface.  I don't want them to become even more worried worriers.  But if I go back and erase those worries I won't have much of a post today. Oh bother.

Now I have revealed a sampling of the little worry wars that rage inside my head.

And here's where my readers can help me.  Feel free to post uplifting comments about how I'm not alone, that you fret about the radio station's timely newscasts too, and that it's normal to worry about night-time potty breaks and other meaningless things that are out of my control.

What Was I Thinking?

The Hobbit movie is now in a theater near me.
A few in our household are excited about this.  Yes, that includes me.

I have enjoyed the J.R.R. Tolkien books and Lord of the Ring movies.  But I have a mind that sometimes strays from the story at hand.  In this movie scene of Lord of the Rings, Liv Tyler's elfin character whispers sweet nothings into the human ear of Aragorn, played by Viggo Mortensen.  While watching it, I let my mind marvel over a couple things about the creation of that scene.

First,
Tolkien had to create the ancient language for those beautiful, magical elves to speak. (Have I mentioned Orlando Bloom was an elf? I digress. But only slightly.)  Back to the language thing.  Tolkien did not whip up a spoken, jibberish language, no. He created a written language, with sentence structure and linguistic rules.  He not only created the 'Elvish' language, he constructed almost 20 for his books set in Middle Earth.  Wikipedia would be happy to share their knowledge on the subject of Tolkien and his created languages.

And second,
Once the written story became a movie, this originally written language had to now be spoken by actors as if it were their first language, while English subtitles flash across the screen for the benefit of us humans.

Yes, this is where my mind goes sometimes.

And now for something completely different (but I promise there will be a connection).

I am s-l-o-w-l-y reading through a devotional book called Praying the Names of God, by Ann Spangler.  In it, week by week, I am introduced to a Hebrew name for the Christian God of the Bible.  The names are taken from the Old Testament, which was written in the ancient language of Hebrew.  What could be more awesome than calling God by names in His own language?  For example, Elohim means God, Mighty Creator.  In English I need to use three words to express the meaning contained in one hebraic word, Elohim.  And it sooo cool to say!  Go ahead and try.
Yahweh Yireh is another example, meaning The Lord Will Provide.

Cool, huh.  These are ancient names of God that have been translated nicely into English in my Bible.  But it is so much cooler to learn how God's chosen people said and prayed His name, way back when the Scriptures were written.

OK, wake up, here is the connection I promised.
As I am learning these names, I got to thinkin'.  Hebrew sounds alot like the Elvish language of Tolkien.  Go ahead a try it.  Lean into someone's ear and whisper:
Ehad, shenayim, shelosha/ani tsame/ yim huledet sameah/layla tov

Make sure you say it Liv Tyler-style:  breathy, whispery, elvishly.  And don't worry about pronunciation, unless you are speaking to a Jew.  Then you may need to practice first.  Sounds just like elvish, yes?

Well, I guess I could have saved Tolkien many hours -- no, probably weeks-- creating a language for the elves of Middle Earth.  But while the Hebrew language is beautiful, especially if it were to come out of Liv's (or Orlando's) mouth, the subtitles of the above sample would have really changed the meaning of the romantic scene. Translated into English:
One, Two, Three/I'm thirsty/Happy Birthday/Good night!

Yup, this is what goes on in my head.  Welcome to my world.