Dear Diary,
Today I have a visual aid. 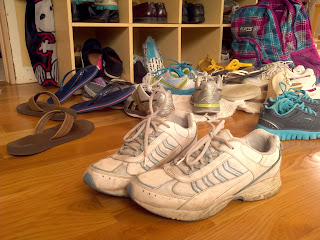 This is typical shoe "cacophony" just outside my mudroom.  Notice the nice shoe cubbies in the background my hubby made.  (Should have made twice as many!)  A family of five generates a lot of shoe litter!

There is something in this picture that gives me sweaty palms and tightens my throat with fear.

See those white-ish, softly worn tennis shoes in the foreground?

I was cleaning out the shoe cubbies several weeks ago and uncovered them.

I'd never seen them before.  Where did they come from?
Based on the coat of dirt on them and worn look, they had been worn plenty.

I set about locating their owner, but alas, like Cinderella's step-sisters, the shoe didn't fit any family members. I was the Cinderella!

I tried to make an excuse for their existence in my house, like, maybe a friend left them here by mistake.  Yeah, and absentmindedly went home in stocking feet?  Don't think so.

Panic began to well up in my chest.  I investigated further.
They are a brand sold by Walmart.  Well, I could have possibly purchased them since I am not above buying shoes at Walmart.

Yet I don't recall ever buying them, much less ever wearing them.
That is why they scare me.

They have since been reluctantly adopted by me as outside shoes.  I wear them when I do manual labor, like mowing, gardening, etc.  They are sturdy and dirty -- great for digging holes!

But I shudder every time I slide each foot into its gaping mouth and tie the laces.
Because they are a reminder that I think I am slowly
losing
my
mind.

Life in the Twilight Zone

The last two times I turned on the TV, something oddly coincidental happened.  Odd, because they were unexpected and unusual events, and coincidental, because they happened while I was watching a show that directly reflected, or foreshadowed, the incident.  Let me explain.

The first coincidence happened yesterday while hangin' with my two teens and a friend who brought over her collection of Alfred Hitchcock.  We adults decided it was time to introduce the girls to this classic, suspenseful director.  Rather than start with his widely known film, "Psycho," we decided to ease into the genre with "The Birds."

About half way through the feature, there was a knock at my front door.  It was a late matinee so it was still daylight.  I opened the door to my neighbor, who asked, "Are you missing a white parakeet?"

"Can I borrow your wheelbarrow?" is really the question I would have expected.
Or "Can I have my power sprayer back?"

But never, "Are you missing a white parakeet?"

So we paused the movie, with its murderous, pecking flocks of seagulls and crows, in order for me to investigate my neighbor's parakeet find, sitting atop his roof.  It was pretty-- white with blue breast -- but it wasn't going to be caught.  It flew to a nearby tree, looking down on us with suspicion and curiosity (Yes, truly! I have been a parakeet owner for eight years, I know their looks!)

I shared with our neighbor the irony of watching "Birds" at that moment.
It was kinda creepy, actually.

Fast forward to this morning.  I had the luxury of few hours to myself. This was ME time!  But I chose to do something real exciting like cleaning and picking up the weekend debris.  So I treated myself to a little TV time while I worked; you know, to instill some entertaining drivel into my dreary chores.

I turned on "Let's Make a Deal," the show where Wayne Brady tells a lucky contestant he can have what is in The Box....or behind Curtain Number 1!

While washing the dishes and watching the negotiations for the cash-in-hand or the envelope marked "Volcano," I got a phone call.

It was from my current employer.
Telling me my past position was no longer available.
Telling me I could take this other job she proceeded to describe.

Or I could turn it down.
And take all the risks associated with turning down the only job offer I have.

The cash in hand.
Or the curtain.
That is my choice.

So while I believe that TV reflects life, I have to look at these back-to-back, coincidental "life-reflecting-TV" moments as anomalies.  And I will be praying that it will become clear which curtain to choose.

But at the risk of sounding superstitious, I will be really careful of the TV program I choose to watch next.

I'll just come right out with it:  I have too much stuff.
And by I, I mean we - my family.

Even with the best intentions, I cannot satisfactorily weed out enough stuff.  I hang on to things "just in case."

While staring at my piles, I started obsessing over the phrase too much.
It can turn seemingly normal activities into ugly scenarios.

Ok, so what if I use positive words/actions? Will that make too much any better?  Let's try:

Nope.  Too much is negative verbiage even with wonderful words.

What if I use too much with a good thing?

Nope again.
Too much of a good thing is still too much.

So, despite my inner desire to justify having too much stuff, I haven't been successful in proving that too much is not a bad thing.

But I'll keep trying.
Because I want to keep my stuff.
Just in case.

Today let's get beyond the magnifying mirror suctioned to my vanity (read A Beauty-filled Season), and go straight for the full length version, multiplied by three for multi-angled viewing!  (Have you ever seen that mirror room in "What Not to Wear?"  Ooh, gives me the willies!)

I'm talking about dressing rooms.  Rooms which, up until this year, I didn't have too much of a problem being in.  Where trying on cute dresses and tops and crops really was a fun experience.  Until I grew a size bigger.

Recently I shopped the racks for at least half an hour, and with optimism and excitment at my finds, brought several summery outfits into the dressing room, only to take off every piece in discouragement.
Why was nothing fitting right?
Oh, gee, could it be I was shopping last year's size?
This is a new year and a new size, sistah!
In fact, not to brag, but I am the heaviest I have ever been outside of pregnancy.
IMG!

Returning to the rack to browse a larger dress size had deflated any sense of fun this spree had brought me.
It was a tight-throated, purse-lipped experience.
Go ahead, purse your lips right now.
Brings on the tight throat and bleak outlook doesn't it?
That is when shopping -- and the dressing room -- became a thing no longer desirable.

Call it middle-age spread, or slower metabolism, or just plain weight gain, it all means the same thing.  No matter the person, to "graduate" into the next size up is not an accomplishment to be relished.

These days, though my left brain is telling me, Don't eat another cookie! or Get up and get some exercise!, my right brain is trying to find a less "painful" way to make try-ons a more positive experience.  And I think I have it figured out.

The next time I take a trip to that dreaded room dressing room, I will have on some emotional
(under)armor to protect me from that image in the three-way mirror.

See you at the next foundation sale!
LJ

P.S.  Here are some other random dressing room moments.

I know it's been awhile since I've written, but that "IMG" is not a typo.

Sure, we are all familiar with the texting shortcut OMG, which I only use as a form of "OMGosh" due to its breaking the third commandment, and by the time I write that all out it's really not making anything short for me anyway....

IMG describes those times you internally exclaim your displeasure at a situation without letting anyone around you in on your secret.  Perhaps you even have a smile on your face during an IMG (otherwise known as IMGWS - inward mental groan with a smile).  Here are some examples of times an IMG may pop up.
I think that conveys the idea.  I know there are more.  Anyone want to share their IMG moments?