You Know You're in California When...

Had a fabulous vacation this summer.  Flew to the West Coast and spent two weeks experiencing the many facets of California.

What a fascinating state!
From the mountains,
to the ocean,
to the valleys, dry and irrigated for orchards and vineyards,
I'd say the land was as diverse as the people who live there.
I know, Diary, I am so profound today!

But had the landscape not given me any clue -- say it was cornfields where ever I roamed -- there are other giveaways that would give me no doubt what state I was in by the end of the trip.

I shall share with the help of visual aids. 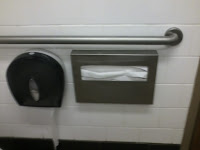 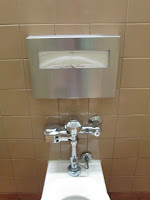 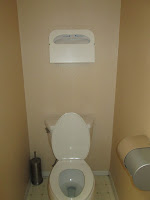 While it is not a law for these toilet seat covers to be in public facilities,
apparently Californians take this potty perk very seriously.

With the exception of the hotels, these were in every public stall I "went" in
--and I frequented many.
Was that too much information?

Universities, wineries, national parks,
restaurants, you name it, it had them:
lobster bib covers for the porcelain throne.
I don't know if the boys were so lucky. 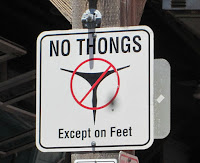 California beaches are colorful, a people watcher's dream.  While I never got in the water to swim, I watched smart, strong people in wet suits brave the waves on their boards.
The Pacific is cold. People in thongs don't go in the water.
I don't think people in thongs can really DO much, anyway. 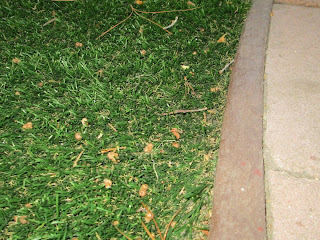 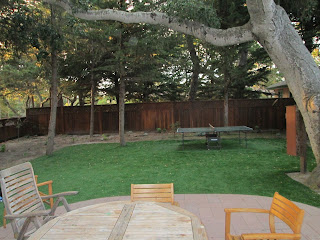 Maybe this view will help....

At one rental house near the coast we had artificial grass..."astro turf," i.e. The Brady Bunch backyard.

Substitute the swing set for the ping pong table and we could have had a set for Marsha and Peter to toss around a football. (No, Marsha, don't do it!!!)

I don't suppose most Californians have plastic grass, but I have to admit it makes for easy care: no watering or mowing.  A little sweep-sweep and you are ready for some putt-putt golf.  Only in Cali!

This is perhaps the biggest clue to the state.  Well, other than the obvious use of the word California.

California is in a severe drought, and is in an official Drought State of Emergency.

We crossed bridges under which there was no lake or river, despite the optimistic/outdated display of blue on our GPS.
Every ranch, farm, orchard and vineyard was irrigated.
Hotels limited the pool and laundry use (to the chagrin of the children and this mom, respectively).
Restaurants served water only to those who asked.

"We're in a drought,"
"Because of the drought,"
prefaced many a conversation with a local.

Yes, CA is a beautiful place with a dark secret lurking beneath its surface. Just a scratch from those tourists paying attention will expose the ugly reality of a bone-dry, dusty, desperate land.
Yes, Diary, I am on a roll with the profound today.


We arrived home to a rain soaked state.  The wettest June on record, with more than normal rainfall already for July. Nature can be cruel.

And while I can't say that I experienced any earthquakes, I'm sure I felt a tremor while lying in my hotel bed in the early dawn of our first morning.  Or perhaps the vibration was a byproduct of a snoring husband. I was wearing ear plugs at the time. I'd rather hang on to the mystery of that moment than give in to the thought that there was a practical explanation for what I felt.

And those are just a few clues, Dear Diary, as to how you know you are in California.

Oh, and one more dead giveaway before I bail: 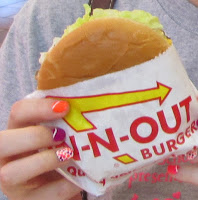