Dear Diary,
So, I'm back from Christmas vacation.
This was not just another pack the dog, kids, and husband into the minivan and "off to grandmother's house we go" kind of vacation.

Nope, this excursion was Xtreme at every turn.  Before I go on, I must provide a warning to my more sensitive readers that some descriptions and comparisons may be too graphic for your sensitive natures.  Steel yourselves.  Or look away.

I originally wanted to write about my first surf lesson -- and it will be mentioned. But I realized there were other things worth highlighting as well.  Let me itemize just a few of the Xtreme moments.


xxxxxxxxxxxxxxxxxxxxxxxx
Worshipping the Almighty God on Christmas Eve, who humbled himself to become a helpless, human child, because he loves me so very much.  That is undeniably, Xtremely awesome!


xxxxxxxxxxxxxxxxxxxxxxxx
Finding myself with my finger stuck in the barrel of a Glock.  Surprised?  Yeah, I was too. The circumstance of this event is too Xtreme to even explain here, so maybe it's better left to the imagination.  Assuredly, it was not loaded and I still have all ten fingers.


xxxxxxxxxxxxxxxxxxxxxxxx
Plunging 200 feet on a 90-degree drop aboard SheiKra, the Diving Roller Coaster of Busch Gardens, Tampa Bay.
Oh. Yeah.
One second, weightless; the next, pulling so-many-G's at 70 mph.
That is Xtreme, especially at my age.  My 13-year-old daughter was on one side of me.  Another boy about the same age on the other side.   I giddily warned him I would be screaming my head off.  He gave me the "OK, lady" head nod, then proceeded through the whole ride in the Hallelujah hands-to-heaven position.  Showoff.


xxxxxxxxxxxxxxxxxxxxxxxxx
Fishing for the big catch 8.5 miles off the coast of Clearwater.  Plenty of fish caught, the biggest by my husband (grouper, 26").  Perhaps the Xtreme moment was throwing a cast-off, 12-inch grouper back into the water and watching a pelican dive for it -- and successfully scooping it into his sack of a beak.  It was like watching him snag a 5 lb. barbell!  How would he swallow that thing?  He flew off a few yards to contemplate this without an audience.  Good moment for the National Geographic Channel I'd say.


xxxxxxxxxxxxxxxxxxxxxxxxx
Surfing for the very first time!  For all the times in my life that I've been to the coast, surfing was not something I have tried.  Not until the spontaneous invitation from my cousin hit my eardrums.  Yes, I will try it, but no, I don't have my suit and isn't the water freezing?  Oh, you have a wetsuit I can borrow?  Well then, I have no more excuses!

This was a head to toe wetsuit.  I have never put one on in my life.  Stuffing myself into this thing took all of the concentration and muscle effort I had.  And to boot I was in the bathroom where I couldn't escape the mirror showing me just what I was trying to put into this thing. I panted, pushed, and prodded my flesh into the neoprene tubes.  It was like stuffing Jell-O into a straw.  I think it took me 10 minutes to get it on, and I was weak, so weak, from the effort.  My cousin kindly called through the door, "I'll help you get the zipper up."  Good.  I was too fatigued to do it myself anyway.  I open the door to be told, "Uh, the zipper goes in the back, not the front."
WHAT????  Now I gotta put this thing on ALL OVER AGAIN, after I first EXTRICATE MYSELF from its rubbery grip???  Close door.  Tug, pull, peel, pant.  Pause.  There it lay.  A rubbery blob of a body suit that WILL NOT get the best of me!  The bathroom walls and mirror were closing in on me.  The fatigue was overwhelming, but, no, I am not a wimp!  I will show it who is boss!  Weakly tug, shakily stuff, and breathlessly prod.  Victory!  Another assist with the zipper and I was off to the beach, weak-kneed and shakey armed.  (Thank you for carrying the board, cuz.)

The rest of the experience I will summarize as a salt water cleansing.  I learned that it is very important -- nay, essential, to stay to the back of the board while surfing.  This lesson was taught over and over again.  The picture here is of a rare moment when I became one with the wave while kneeling.  The rest was pretty much a water boarding experience. 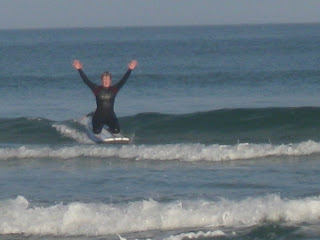 So, my Christmas vacation had its moments of new discoveries and experiences along with the familiar traditions and events.

But there is one thing I have wanted to do for a few years now.
Something so horrifying and outrageous that even my husband tells me, "No way."
I know people who have tried it that say "never again."
My Xtreme desire?

To have just one meal at the Waffle House.

It's Xtreme, but YOLO!
LJ